Yesterday we released our two most requested features: framework search and Twitter integration. This means you can now filter by candidates who know a specific framework such as Rails, rather than just a specific language like Ruby.

We've also had a lot of requests for finding iOS and Android engineers, and with this new release you can now find engineers who have committed to an iOS or Android repository. You can see the additional skills you can now filter by in the screen-shot below. 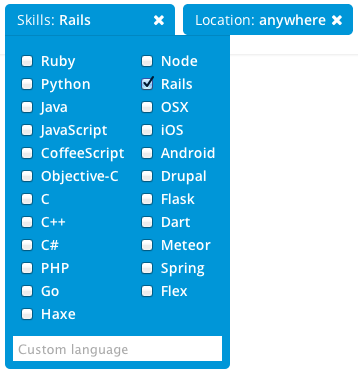 Our repository detection works by looking at a combination of the predominant language in the repository, and also the files in the root directory. Unfortunately this means some frameworks, such as Backbone or Angular, are difficult to detect; we're working on improving this.

If there's any other frameworks you think we're missing, please let us know.

We've also started pulling in the candidate's Twitter feed into the details overlay, which is often useful to get a handle on a engineer's character and interests.

Hopefully these features make searching for talented candidates easier. We have lots more planned for 2014!